Conflicts in the city can be a result of relation between two or more actors. These actors has common interests in theirselves. In some cases, they cannot mix or meet in the middle, it causes spatial problems. To solve these problems between actors in short time, there are physcial conflict components which result to mobility or lack of it. When it is looked at long-time, these components tend to become permanent. Therefore, it damages well-established spatial continuity & social connection. In this research analysis, at first conflict actors will be defined and then, cases will be examined interms of actors, conflict components and outcomes..

Conflict Actors
As it was mentioned, actors has an important role in spatial conflicts. To understand it, actors are generalized under three headings. These are community, state and para-military groups.

Cases are showed with actors and conflict types in the following chart. 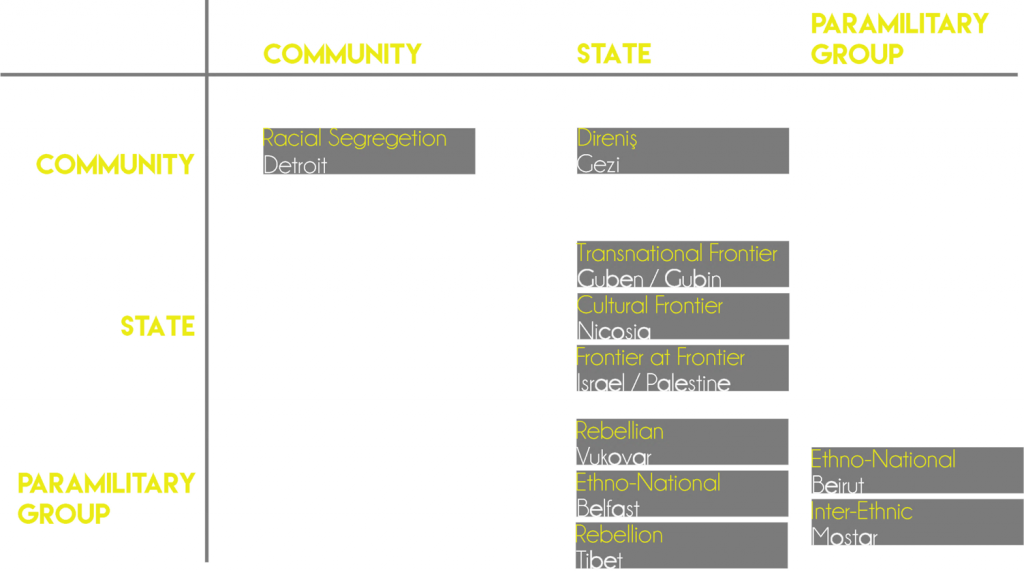 In this chart, as it is seen even the geography is different conflict types or actors as we generalized can be the same.

Conflict Components
In contested space there is remarkable consensus on propensity of such “conflict components” to separate populations, define particular groups and areas, reinforce power relationships, and reject perceived forms of difference.

Outcomes
Conflict components has different meaning for each sides. For example, while “wall” meaning is “security ring” for Israel side, its is “apertheid wall” for Palestine side. In this research, these meanings, feelings or reactionas are called “outcomes which are defined below: