Trying to explain the phenomenology of war triggers a lot of important questions which need to be answered to reach a significant conclusion. A general perception of war would define it as (a ‘war event’) an occurrence of purposive and lethal violence between two or more social groups pursuing conflicting political goals that results in fatalities, with at least one belligerent group organized under the command of authoritative leadership.

In this article war is approached by a diachronic analysis regarding it emergence in human history and its relation to territoriality. Human nature is an important central topic involved in war discussions. Understanding how long war has been part of human condition and whether it is biologically required gives us clue on whether there can be any possibility to avoid war. Another approach wood look upon war as a social construction urging from variations of environment namely the emergence of scarcity. In this case a social contract would be needed to solve community and individual relations.

If human nature is to be considered from the evolutionary perspective humans can be depicted in two different ways. The first approach sees man as a xenophobic” killer apes” accepting chimpanzees as our primate. This approach is based on a misunderstanding emerging from the opinion that evolution and peace are always at odds. But at the same time human has been found to be very similar to bonobos as well which are peaceful and “lovemakers”.

Yet the first approach towards human behavior as xenophobic killerswas supported by thoughts of many thinkers of the time. Baxter would argue that “of all the beasts, the man-beast is the worst/to others and himself the cruelest foe”. The idea was justified by Cartmill to be linked with early hominins as hunters creating thus a bleak, pessimistic view of human beings and their ancestors as instinctively bloodthirsty and savage (1997, p.551). Ardrey was another thinker who emphasized human competitive and killer instinct as the main factor that acted out in warfare, that made humans what they are today (1961).

According to Ardrey we are Cain’s children. The union of the enlarging brain and the carnivorous way produced man as a genetic possibility (p.321). Man, is a predator whose natural instinct is to kill with a weapon. It is war and the instinct for territory that has led to the great accomplishments of Western Man. Dreams may have inspired our love of freedom, but only war and weapons have made it ours.

If we were to make a decision about which approach to accept it would be beneficial to have a look on three different views of man, which are: 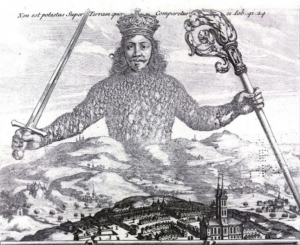 Hobbes holds a dark view on men’s nature. He describes a natural position of “Warre where every man is enemy to Every man and each man conducts A miserable life that is “solitary, poore, nasty, brutish and short” (1651). According to him the only way to get out from the miserable condition of war is social construction.

John Lockean view of Man in his Natural Position

Women and Men are “in a state of perfect freedom to order their action…without asking leave or depending upon the will of any other man” (Locke,1698)

Individuals in Locke’s natural position are free, equal and rational and they pursue a markedly independent course in thought or action. They are individualists. No one wishes to bring harm upon their neighbors. Occasionally however, someone happens to spoil the tranquility of the natural position and trespasses on other people’s territory (Davy,2012). Under the law of nature … everyone has the right to punish transgressors (Locke,1698).

Breaking the peace would sound quite irrational action for Lockean rational individualists so it triggers many questions in our minds. Locke justifies the occurrence of conflict with territoriality and emergence of scarcity. Individualists acquire property by their labor and the use of natural resources. This accomplished, they also limit the opportunity of others to use the same resources, which is no problem” as long as there is enough and as good left in common for others (Davy,2012).

Rousseau and the Natural Position

Differently from any other thinker Rousseau holds a positive and naïve view regarding the savage men.

“Savage men wandering in the forests, without work, without speech, without a home, without war, and without relationships, was equally without any desire to hurt them, perhaps not even recognizing any one of them individually” (Rousseau, 1755).

Social contract comes as a need to protect themselves from the hostile environment not to prevent the condition of war since human beings are able to form a body politic and transform into citizens uncorrupted by society.

What we can say by looking at all these three approaches is that human kind has been condemned to unavoidable violence and war by neo- Hobbesian view of evolution and has been risen unrealistically optimistic level of risk free behavior and agreement due to Rousseau(FRY,2013). Do we really need to choose between Hobbes and Rousseau?

What is true and cannot be neglected is that we are where we are now due to evolution and natural selection and that by evolution we have inherited a capacity to make war as equal as the capacity to make peace. We are genetically programmed to make use of both these capacities to some “extent and under certain circumstances” (Fry,2013).

Reality is complex nuanced and uncertain

Survival of the fittest is based on selection but selection often acts against extremes. The situation would be better explained by relative fitness. Fitness is essentially a ratio, with the numerator reflecting the success of genes in projecting copies of themselves into the future and the denominator, the success of alternative genes. Maximization is done by producing the largest ratio. Most creatures, most of the time, find it easier to maximize the numerator.

Another question triggered by this discussion is finding out what defines the breaking point when species decide to reduce the numerator. This could be easily explained by examining evolutionary stages of human being.

From hunters and gatherers to Foragers 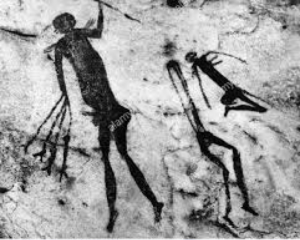 There is not too much scientific evidence on hunters and gatherers as warriors against themselves. The population was considerably law and the main trend of conflict was that if interspecies in which our ancestors had to protect themselves from outsiders which were mainly aggressive animals. Basically, it was a fight aiming to provide food and protection.

This example has been chosen since archeologic scientific evidence is the closest in time and more complete in terms of temporal depth and gives us an insight about emergence of war as defined today.(Fry,2013)

How did conflict and cooperation become transformed as foragers adapted to changing environmental and social conditions after they left behind their nomadic life as hunters and gatherers?

Early foragers who occupied eastern North America during the Paleoindian and Early Archaic periods (11 000 and 5000 BC), were never numerous, leaving only stone tools and the residue from activities associated with butchering game, quarrying flint tools and camping for short periods of time. Foraging Groups, composed of extended families, and maintained a high degree of mobility, fluid group membership, and periodic aggregation of multiple families.

These gatherings, perhaps lasting for a few weeks, would have been critical for promoting identity and reducing risk and uncertainty by forming and maintaining social kinship networks that in turn resulted in exchanges of ecological and social information (Anderson & Sassaman,2012).

Several modes of conflict and cooperation: homicides, revenge, spontaneous conflicts, and raids. Each trend would be accompanied by associated cooperative institutions that promoted peaceful relations. Broadly similar responses to violence and conflict resolution as those observed in modern hunter-gatherers.

Homicide: a person with a grievance takes aggressive, unilateral action to punish another individual or to prevail in dispute. So aggrieved individual would take justice in his own hands in seeking retribution. Violence is limited among non-segmented hunters and gatherers because they lack overarching, cohesive kin organizations necessary for coordinating groups larger than the family so basically there is no chance of WAR.

A homicide is likely to be perceived as an individual loss shared among one’s kin rather than as an injury to the social group(Kelly,2000,p.47).Justice prevails when only the killer, rather than another family member, is the target of lethal revenge. Balance is thus restored between families once the homicide is over.

Yet there may be a chance of conflicts among foragers that may be initiated by neighbors attempting to exploit the resources of another local group, and may extend as relatives and friends on both sides become entangled in bitter disputes.

Segmental Foragers and the rise of Blood Feuding

As population increased over the centuries after initial settlement due to foraging groups switching into new constituent groups, annual hunter and gathering ranges decreased. Over time, the net effect of limited access to resources would result in increased tensions and strained social relations among neighboring bands (Anderson, 1996).

Now there is a shift of conflict mode from simple homicide to feuding in which aggrieved parties seek personal retaliatory justice from any member of the targeted group through blood revenge over grudges. FEUDING-an organized means of violence carried out by small informal, and temporary kin militia groups working under weak chains of command with rudimentary powers of dispersion (Reyna, 1994)

Generally, one side takes the offensive, but there is no necessary political objective beyond the maintenance of personal or group honor. Late Paleoindian Dalton culture gives evidence of an early example of feuding (8,500 to 7,900 BC) in the Misissippi Valley.

Dalton culture is an early expression of tribal organization with all the hallmarks of segmented hunter-gatherers: formal cemeteries, long distance exchange, symbolic weaponry and non-egalitarian status relationship. Yet proper transition to segmental foragers was marked in the period from about 5000 to 1000 BC.

Transformation of society marked a change in patterns of aggression, alliances, cooperation, conflict, and peacekeeping over a large area of Eastern North America.

These tribal –like, local groups arose in resource-rich river valleys of the Southeast and Lower Midwest(Anderson,2012). By 5000 BC conflicts appear to have intensified with the development of revenge-based blood feuding in resource-rich areas.

Why did this complex societies emerge around 5000 BC and not before? This period coincides with Widespread aridity and expansion of pine forests.

“Conflicts probably broadened and intensified when neighboring groups fell on hard times making it more difficult for people to move or expand their territories in search of desperately needed food” (Milner,2004)

Population growth increasing territorial need is frustrated by restriction of territorial access. This led to rising collective violence gradually shaped to war and finally warfare. Territorial boundary once a requirement to resist natural selection and survival of the fittest is now in identified groups with different social characteristics and political goals. As population increases and social relations change patterns survival of the fittest requires a reduced denominator of the ratio.

Territory means power. It can either be achieved by war and alliances. When alliances engage in wars, that is where the process of warfare starts and territory changes boundaries very often. (Cioffi-Revilla).

Black and white is usually utilized to depict restriction and share of land uses in a strict pattern of access. Sometimes the boundaries need to be redefined and smoothened by creating some GREY ZONES which would probably solve conflicts of interests at any scale.