CPTED asserts that the proper design and effective use of the built environment can lead to a reduction in the fear and incidence of crime, and an improvement in the quality of life (Crowe, 2000). Newman (1973), Moffat (1983) proposed that there are five broad characteristics to CPTED concepts; Natural surveillance (see and be seen),access control (decreasing opportunities for crime by denying access to crime targets), territoriality(developing a sense of territorial control), physical maintenance (target hardening) and order maintenance(management and personnel techniques).

A number of questions which were main inputs for urban security by scholars were analyzed in this section. These questions are; “Are some kinds of dwellings safer than others?,Is density good or bad?, Is movement in your street good or bad?, Are cul de sacs safe or unsafe?, Is mixed use beneficial or not?, Should residential areas be permeable or impermeable?” 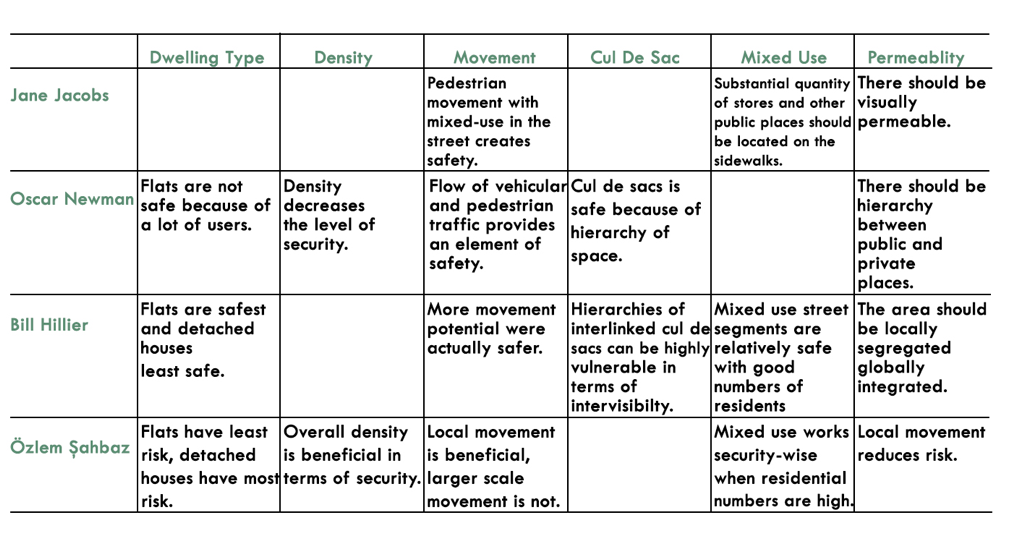 Figure 1. Prepared according to the approach of academicians who work on urban security.

Urban morphology design that is the spatial distribution, composition, and main functions of the constituent elements of the cities play an important role in their vulnerability or protection against various events, particularly military attacks against the enemy. This is called as “passive defense”. Therefore, in the figure 1 different patterns are investigated in terms of stability and resistance against attacks.“Urban fabric” was considered in terms of legibility.Unpredictable of the network makes the system difficult to be understood to strangers. “Network structure” was examined whether or not it provides help to people in different parts of the city using alternative routes during urban crises.“Population Density” is whether or not its concentration at specific place. Deconcentration creates opportunities to take refuge in safe areas.In the title of “CBD”, centralization was considered. This helps a more appropriate distribution of vital political, economic, and industrial uses as well as various municipal facilities. Water and gas flow circulation system type is the last topic. When one part of the system damage one part of the system blocks to all other parts of the city which can lead to health and living problems and other negative consequences. 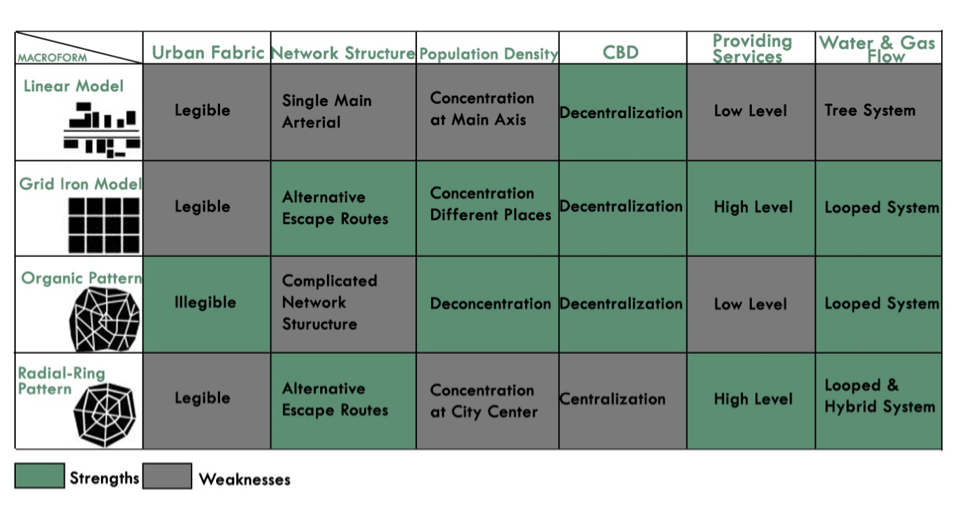 Figure 2. Prepared according to the paper of “ Secure Urban Design in Terms of Passive Defense Approach; Analytical Considerations for Improving Form-based Characteristics in Iranian Cities,Tehran” by Shakibamanesh, A.

There are some scholars who work on security. These are :

Jane Jacob discussed open and permeable mixed use environments. Streets and their sidewalks are the main public places of a city. Streets of successful city neighborhoods must have three main qualities. First, there must be a clear line between what is public space and what is private spaces. Second, there must be eyes upon the street ,eyes belonging to those we might call the natural proprietors of the street. The buildings must be oriented to the street. Third, the sidewalk must have users on it fairly continuously, both to add to the number of effective eyes on the street and to induce the people in buildings along the street to watch the sidewalks in sufficient numbers.

Oscar Newman explained defensible space as operates by subdividing large portions of public spaces and assigning them to individuals and small groups to use and control as their own private area. He grouped all buildings into the three categories  that capture the essential differences among them. These three categories are: single-family houses; walkups; and high rise buildings. In addition to this, he searched the effect of building type on residents’ control of streets.  As a result, the larger the number of people who share a territory, the less each individual feels rights to it.

Bill Hillier studied Space Syntax that is related  with crime and social use of space. Space syntax is a set of techniques for representing and analyzing the street networks of cities in such as way as to bring to light underlying patterns and structures which influence patterns of activity in space, most notably movement and land use. The model works at the level of the ‘street segment’ between intersections. Integration is the fewer intervening lines which need to be passed through to go from a line to every other line.

After Bill Hiller works, there is a study that related with topological relationships between private and public space in Dutch towns prepared by van Nes. The title of it is Micro Scale Spatial Relationships in Urban Studies.The application of these tools in the analyses on built environments shows clearly that micro scale spatial relationships have impact on street life and street safety in urban areas.

Topological Depth Between Private and Public Space is related with the relationships between building entrances(private) and street network(public).

In this figure, black dots are private and white dots are semi private. If an entrance is directly connected to a public street, it has no spaces between private and public space,then the depth is equivalent to zero. If there is a small front garden between the entrance and the public street, the depth value is one.

Constitutedness and Un-constitutedness depend on how building entrances are connected to a street. It is about the degree of adjacency and permeability from buildings to public space (Hillier and Hanson 1984, p. 92).

Inter-visibility and Density of Entrances to Streets are explained as the more entrances connected to a street, the higher the probability that someone can come out from a private space into the public space. However, high density of entrances connected to a street does not always imply high inter-visibility. There is a distinction in the way entrances constitute streets and in the way they are inter-visible to each other. The way entrances and windows are positioned to each other influences the probabilities for social control. 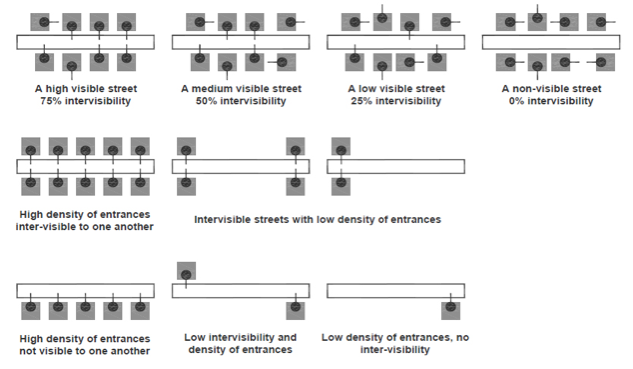